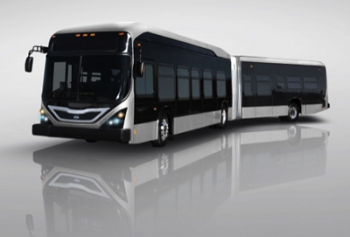 The 20 BYD 60-foot articulated buses are battery-electric, and the first in their category available in the US. Manufactured at BYD’s Lancaster factory in Southern California, the buses have an approximate range of 250 miles on a single charge and capacity for up to 120 passengers, depending on their configuration.

The fleet is projected to reduce annual carbon dioxide emissions from 308 tons of GHG to zero. This is the equivalent of saving over 34,000 gallons of gasoline or removing 66 conventional passenger vehicles from the road for an entire year. LAWA announced that in addition to the environmental benefits, and providing users with quieter rides, these buses will significantly reduce the fleet’s energy and maintenance costs.

BYD’s successful selection as a vehicle provider was a result of LAWA’s need to take advantage of the latest technological developments in clean transportation. The acquisition of the fleet was approved at a recent meeting of the Los Angeles Board of Airport Commissioners, as a move for LAX to comply with LA’s “Sustainable City pLAn,”, an initiative by Mayor Eric Garcetti to reduce the city’s greenhouse gas emissions to 45% below the 1990 baseline levels by 2025. The purchase also brings LAX a step closer to fulfilling the Alternative Fuel Vehicle Requirement initiated in 2017, the year when the airport’s bus operations transported over 2.4 million passengers on more than 53,000 trips.

"With the introduction of these new electric buses, LAX will have the largest fleet of electric airfield buses at an airport in the U.S., transporting us to a cleaner and quieter future for buses,” said Michael Christensen, LAWA’s Deputy Executive Director for Facilities Maintenance and Utilities Group. “These buses are smart for both the environment and our bottom line, and we’re excited to start rolling them out in the coming year.”

BYD is the world’s largest electric vehicle manufacturer, as well as the largest electric bus maker in North America. The company entered the U.S. market in 1999 and has invested a total of around 300 million USD in the country to date. With deliveries of battery-electric buses to more than 40 U.S. clients – including Facebook, Stanford University, UCLA, UCI and Long Beach Transit – BYD has also been successful in introducing a range of battery-electric trucks to customers such as SF Goodwill, LA Port and Daylight.