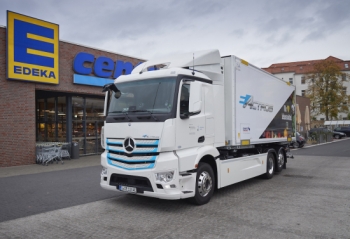 Mercedes-Benz Trucks has delivered a fully electric eActros for on-road testing to EDEKA. The German retail association will be testing a 25-tonne truck with refrigerated body for one year in Berlin, where it will be used to transport fresh, temperature-sensitive foodstuffs in Germany's capital.

The daily route from the warehouse in Grünheide on the outskirts of Berlin to various EDEKA supermarket branches in the city center and surrounding areas is between 150 and 300 km (93 and 186 miles). The vehicle will operate in a double shift pattern. The weight of the transported goods can be up to 10 tonnes.

During loading and unloading, the vehicle is charged to ensure that the total range of the eActros (up to 200 km with a single battery charge) is optimally utilized. EDEKA is the only company from the retail sector in Germany which will use the eActros in its own fleet of vehicles.

EDEKA is one of a group of 20 customers—all from various industries—that are now integrating the heavy-duty electric truck into their fleets. Each of these selected customers will put a near-series version of either the 18 or 25-tonne variant through its paces in real operations and will test the respective vehicle for its suitability for their daily field of work.

The aim of Mercedes-Benz Trucks is to make emission-free and quiet driving a reality in cities from the year 2021, also with series heavy-duty trucks—and all of this as economically viable as with a diesel truck. The test series consists of two phases, each with ten customers and spanning a total of around two years.