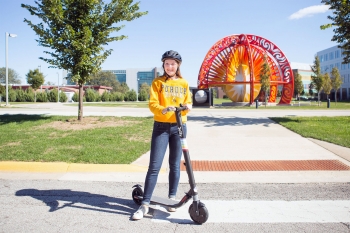 Ford’s Next EV Is A … Scooter?

Scooters are a big deal right now. Not the traditional Vespa sort (sadly), but the stand-up electric kind.

The kind companies like Lime, Bird, and others have been carpet bombing American cities with over the past year.  The idea is, you can pick up one of the light mobility devices scattered about the town, hop on and drive it where you need to go, then leave it. Payment is handled via an app. They’ve become so popular it looks like the automotive giant Ford may be getting in on the two-wheel action. The automaker is apparently behind a new outfit called Jelly.

Currently, the electric scooter startup seems to still be in stealth mode, but is involved in a research project on the campus of Purdue University in West Lafayette, Indiana.   According to a press release (reprinted in full below) from the school, the research intends to investigate “best practices for using e-scooters.” Despite the devices being all over U.S. cities in a mad scramble for market share, the school says the study is “thought to be the first academic research to study how the oft-maligned e-scooters can best be incorporated into an urban environment.” The University will see 40 of the Jelly scooters dropped off around the campus over the next few weeks.