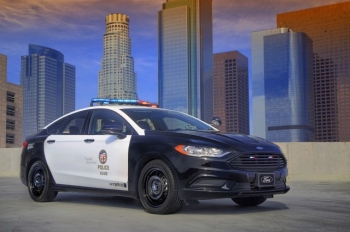 Ford is in the process of applying hybrid technology to a vehicle type that seems like a natural fit for it: police cars.

It’s about time. Ford claims to have the industry’s first pursuit-rated hybrid police car with the Police Responder Hybrid Sedan—the police-duty version of the 2019 Ford Fusion Hybrid sedan that will soon be delivered to departments around the nation, including to the New York Police Department.

The company announced today that it is starting to finalize orders for its first Responder Hybrid Sedans, aimed at cities and urban duty. The largest single order so far, of 156 Responder hybrids, comes from the NYPD. Major police departments in Los Angeles; Columbus, Ohio; Salt Lake City; South Miami; and Virginia have ordered 10 to 150 of these hybrid sedans each.

This isn’t the first time Ford’s hybrid system has been deep-cycled in 24/7 urban duty. Nearly a decade ago earlier versions of the same system were getting put to the test, in taxi fleets in New York, San Francisco, and other big cities. According to Ford, just over 90 percent of the original 2005-2012 Escape Hybrids are still in use today.