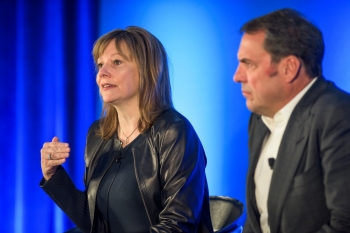 The company submitted to the government a proposal for a 7% ZEV requirement to begin in 2021, increasing 2% each year until 2030.

In an opinion piece by GM CEO Mary Barra in USA Today, she states: “We estimate this program has the potential to place more than 7 million long-range EVs on the road by 2030, while yielding a cumulative incremental reduction of 375 million tons of CO2 emissions between 2021 and 2030.”

The Detroit automaker currently has the Chevy Volt, Chevy Bolt EV and Cadillac CT6 Plug-In available in the U.S. More EVs are expected from GM brands in the coming years.

GM is currently 1 year into their plan to launch 20 EVs within 5 years. The Chevy Bolt was a first step towards building affordable, profitable all electric vehicles.

The company expects EV profitability with their next electric vehicle platform in 2021. But uncertainty was created in government regulations and the market when the Trump administration announced their intention to fight the authority of the California Air Resource Board (CARB). The agency has a ZEV mandate that has been adopted by several other CARB states.