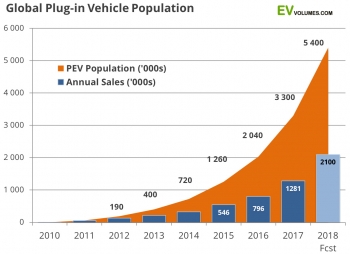 Preliminary results for July show an increase of 53 % over July 2017. China stands for 51 % of the global volume, so far, and reached a peak share of 4,8 % plug-ins in worlds largest car market.  Battery electric vehicles (BEV) stand for 64 % of the global volume, plug-in hybrids (PHEV) for 36 %. This marks the global average, depending on the individual incentive schemes, the mix of battery electric vehicles and plug-in hybrids varies significantly between countries. BEVs can represent as much as 88 % of plug-in sales, like in the Netherlands, or just 12 % like in Finland. The Europe average was 51 % BEV for 2018 H1; in China BEVs stand for 73 %. In USA this number was 53 % until June, now shifting fast towards higher BEV share with more Tesla Model-3 deliveries.

It is safe to predict that global sales of plug-in vehicles will surpass the 2 million mark this year. We are expecting 2,1 million deliveries,  a 64 % increase over the 2017 result. This is considering the regional growth trends and the seasonality of sales, with 60-65 % of deliveries occurring in the second half of the year. The above numbers are for battery electric vehicles (BEV) and plug-in hybrids (PHEV) and comprise the light vehicles categories cars, SUVs, MPVs and light commercial vehicles. Medium and heavy commercial vehicles will add another 280 000 sales in 2018, nearly all of them in China. The global plug-in vehicle population will reach approximately 5,4 million light vehicles by the end of 2018, 64 % more than at the end of 2017. Medium and heavy commercial vehicles add 800 000 units to the global stock of plug-ins.

The by far largest growth contributor is China, where we expect sales to increase by over 500 000 units to 1,1 million in 2018. The long awaited Tesla Model-3 will contribute with over 130 000 additional units this year. With deliveries still restricted to USA and Canada in 2018, the Model-3 already was the worlds best selling EV of all categories in June, July, much likely in August and in many months to come. It will completely dominate the North American plug-in vehicle market from now on.