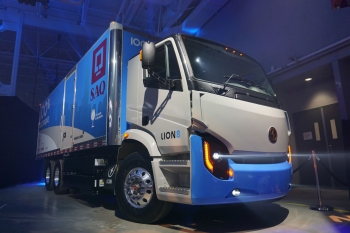 It is with industry and market leaders, the Minister of Economy and Innovation, Pierre Fitzgibbon, Minister of the Environment and the Fight Against Climate Change, Benoit Charette, and Minister Responsible for the Laurentides Region, Sylvie D’Amours, that The Lion Electric Co. (Lion) unveiled its first all-electric Class 8 urban truck this morning. The Lion8 will be commercialized this Fall and the first vehicle will be delivered to Société des Alcools du Québec (SAQ).

Lion’s ambassador, Laurent Duvernay-Tardif, had the honor of unveiling the all-electric truck. Laurent is an NFL football player for the Kansas City Chiefs, medical graduate and is also President of the Laurent Duvernay-Tardif Foundation, which has been traveling onboard Lion’s zero-emission school buses to visit schools all over Quebec during its GET MOVING WITH LDT! tour.

The Myth Becomes Reality  Until recently, the idea of an all-electric Class 8 urban truck was still a crazy idea; a dream that the experts at Lion have now turned into reality. The Lion8 is designed, created, and manufactured to be electric and has a range of up to 400 kilometers on a single charge. The elimination of noise pollution, optimization of visibility, and unparalleled turning radius make the Lion8’s driving experience safe, enjoyable, and incomparable.

Lion also benefitted from the Quebec Government’s support to develop this innovative technology. In fact, the Lion8 is a result of the 2013-2020 Climate Change Action Plan whose budget is derived from the Green Fund.

• Oil-free operation, with very few moving parts, and brakes that last longer thanks to a regenerative braking system;

• Custom-built and engineered in Quebec to withstand North American weather and road conditions.

“The government is pleased to have contributed $8.6 million to the success of this promising initiative and to have contributed to the electrification of transportation in Quebec. The Lion Electric Co. and its partners TM4, AddÉnergie Technologies, and Solution Centum Adetel Transportation have combined their efforts and expertise to develop a zero-emission heavy-duty truck that demonstrates Quebec’s leadership in innovation and sustainable development. We are proud to prioritize greenhouse reduction projects in Quebec.”

– Pierre Fitzgibbon, Minister of Economy and Innovation and Minister Responsible for the Lanaudière Region

“Transportation electrification is part of a solution package to reduce greenhouse gas emissions, develop our economy, and create permanent, sustainable jobs. I congratulate The Lion Electric Co. and its partners whom, thanks to their bold vision, are now positioned to conquer the electric truck market. It is with the help of innovative and pioneering companies like the Lion Electric Co. that Quebec continues to transition to a low-carbon future. Our government will continue to promote this promising industry as part of its efforts in the fight against climate change.”

- Benoit Charette, Minister of the Environment and the Fight Against Climate Change

“We can witness first-hand today what a forward-thinking Quebec company can achieve with employees and partners that share its vision. We should be proud to have a leading technology firm within the transportation electrification field right here in our own backyard. The environment is a pressing issue, and we fully support every step made as part of the effort to reduce our carbon footprint. I’d like to congratulate The Lion Electric Co. for manufacturing an all-electric truck.”