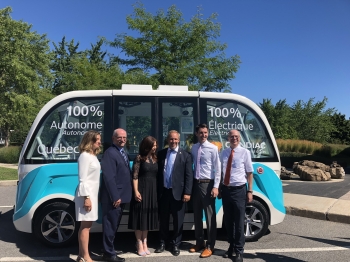 Electric and smart transport cluster Propulsion Québec is proud to announce that the first long-term 100% electric self-driving shuttle project to be used on a public road in Canada will operate in Quebec, starting as soon as this summer.

The one-year pilot project, led by Keolis Canada and the City of Candiac with financial support from Québec’s Ministry of Economy, Science and Innovation and in partnership with Propulsion Québec and Technopôle IVÉO, was unveiled to the public today.

Says Sarah Houde, executive director of Propulsion Québec, “Quebec has what it takes to make the smart and electric vehicle industry—which is booming around the world—a major source of revenue in Quebec. This unique pilot project will allow us to test manufacturer NAVYA’s latest generation of self-driving shuttles for an entire year, including in Quebec’s rough winter conditions, which will no doubt lead to technological advancements that will benefit the entire industry and boost Quebec’s profile around the world.”

For Quebec’s smart and electric transport ecosystem, the project is a result of the partnership between various industry players and a natural extension of one of the seven working groups of Propulsion Québec, which aims to make Quebec a global building ground for demonstrations and pilot projects in innovative mobility. The project will also provide an opportunity to gather and share valuable data that will then be used to help launch future projects throughout the province. Through its operations, the shuttle will also inform a regulatory framework, as well as public policy and practices, that will make Quebec an even bigger draw for smart and electric vehicle development, testing, and commercialization.

Propulsion Québec expects the ecosystem to grow rapidly and is excited about the future of Quebec’s smart and electric transport industry. The potential for job creation with these new technologies is largely founded on Quebec’s undeniable competitive advantages: the province’s low-cost clean energy production capabilities, long-standing expertise in the development of many types of vehicles and components (particularly batteries) and now, artificial development, the availability of strategic metals used to manufacture batteries, the only vehicle testing and research site in Canada (in Blainville), and a regulatory and public policy environment that have made Quebec a North American leader in transport electrification.

Quebec’s smart and electric vehicle cluster rallies the entire electric and smart vehicle sector around joint projects aimed at positioning Quebec as a leader in smart and electric land transportation systems. Created in 2017, Propulsion Québec currently has 88 members from a variety of sectors and deploys its resources across seven distinct working groups tasked with developing and supporting innovating projects. The cluster receives financial support from the Government of Quebec, the Government of Canada, and Communauté métropolitaine de Montréal (CMM).