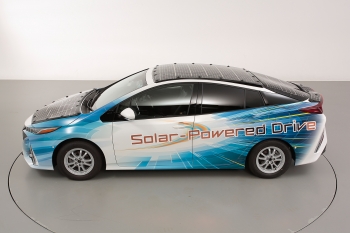 While Toyota has been skeptical of electric cars, the carmaker is expressing optimism about technology that can supplement plugging in: solar.

Along with its battery partners NIDO and Sharp, Toyota is experimenting with a new Prius Prime in Japan (called the Prius PHV there), equipped with 860 watts of solar panels on the roof, hood, and rear hatch.

The car uses photovoltaic solar cells from Sharp that Toyota says are 34 percent efficient "plus."  Altogether, the company says that on an ideal sunny day, the solar panels could give the Prius PHV up to 27.6 miles of electric power per day.

That's a big jump from the current solar roof that Toyota offers on the Prius PHV in Japan, which delivers 180 watts of power from panels that are 23 percent efficient and maxes out at about 3.8 miles a day. It can only charge the batteries while the car is parked, while the test array will charge even while the car is driving.

Read the whole story on greencarreports.com