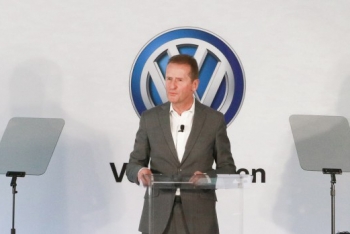 UPDATE: The very premise of this piece has been shaken when Volkswagen told the original source of this report, Automotive News, that its chief executive had misstated the number of MEB vehicles it now planned to eventually build to be 50 million, not 15 million.

The latter is not surprising based on previous targets that had already been released.

Accordingly, we've changed those references in our piece.

Volkswagen already had ambitious goals to ramp up electric-vehicle production to a rate of up to three million EVs annually by 2025, and potentially hit 10 million vehicles around 2027 if all goes right. But its plans look even more bullish on electric cars, considering the number of vehicles it's now supposedly signed up to build over a longer stretch of years: 15 million.

Volkswagen Group CEO Herbert Diess, speaking to Automotive News, in an interview from October 31 but published yesterday, said that the company has already sourced the batteries for 15 million electric cars to be built on the modular electric (MEB) platform alone—not counting additional premium-brand vehicles that will be built on other platforms.